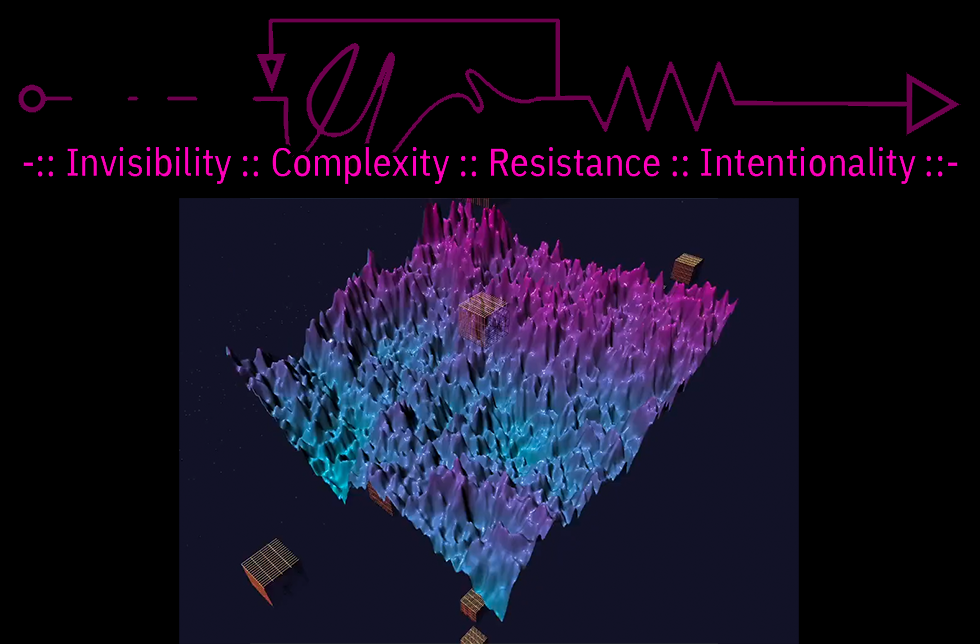 The Dark Side of the Hills

A musical journey through a live generated ocean-like terrain exploring different element flows of our music using max/msp patch for exploring and visualizing our music. The inspiration for music comes from a Baader-Meinhof effect in an attempt to spark an interest for the audience, and for visuals, it sparks an interest in working with 3D particles as well as objects put together in order to create scenery visuals. The base functionality of this piece comes from a plane and gen that is connected to our music in order to filter out key components using peak amp for its generative functionality. The camera is following a small jit.gl shape that is in the middle of the terrain remained hidden and with an offset giving a feel of travelling through the piece. Original music composed and performed by Sina Karimi, using electric guitar and DAW for recordings and mastering the track – engineered by Amirsalar Vatankhah Lotfabadi.

• We composed a song that Sina wrote and played on electric guitar and applied it to a backing track composition. We had our friends listen to it individually; they all asked if it was a Pink-Floyd song! It was a humbling feedback for us because it demonstrates the element of invisibility properly delivered through the Baader-Meinhof effect.
• One of our challenges was to maintain the visual flow with the live music due to the complexity of the terrain. Making the music express the terrain motions as it plays instead of applying a generic harmony.
• Using camera positioning, we envisioned a 3rd perspective effect as if the audience is viewing the terrain from a bird’s eye point of view where you can visualize everything happening in space by keeping the art field in focus with the camera movements. The bird’s eye effect breaks the resistance against seeing the big picture when we can choose to put the future in perspective and look at the events from a far lookout instead of focusing on the past and longing for getting “back to normal”.
• The light source has been deliberately rotating around the canvas to illustrate the transition between day and night while the audience’s look remains at the center of the terrain. It is to stimulate the attention to remain on the current moment rather than daydreaming about the future or the past. By focusing on the current situation and learning from it, we set our intention to take responsible action and restructure the future of technology in transition to a post-pandemic life.

Sina Karimi is an art & technology enthusiast with a keen interest in developing creative contents that engage the two components to deliver conceptual artworks. He has explored his passion in hardware technology to build creative compilations such as a 3D printer as a tool for creating much more complex technology objects such as a drone and even an electric guitar. Throughout years, he has also composed music as a personal hobby and developed outstanding skills for competitive video gaming tournaments. He found his strength in playing support roles in any teamwork settings to contribute to the solution, no matter the challenges. Being a versatile multitasker, he is determined to employ his passion for hardware and software technology in combination with his music and video gaming innovative ideas towards a game development entrepreneurship career path.

Amirsalar Vatankhah is an Art oriented student who likes to design and create ideas that helps filling a major gap in people’s daily matters. His passion and love for computers, technological advancements, and building interactive/non-interactive art pieces led him towards better ideas and a great team player. He has acquired his talent in painting, drawing, and sketching from his grandfather and experimented his talent in diverse drawing styles. His passion for creating an interactive art piece led him in programming an LED light strip and transforming them into an interactive art piece. One of his early achievements that he takes pride in is a group project which he was the head of design and model making during senior year of high school which got nominated for Khwarizmi international award. Amir will continue to put all his talent and skills to bring out the best ideas for the community with the help of his great peers and teammates.